How Much Does A Plumber Charge To Unclog A Shower Drain?

Unclog a shower drain… a clog in the bathtub or shower is often something that builds up gradually and can sneak up on you.

You may not even notice it at first but draining begins to slow down as the clog begins to build and eventually water begins to pool while you use the shower.

When The Drain Slows Down In The Shower

Depending on how often the shower or tub is used the clog may build up over a couple of days or longer.

You can check out our tip below on how to unclog a shower drain but chances are the build up is taking place deeper within the drain line.

The cost to unclog a shower drain can vary depending on the circumstances, which tools are required to clear the blockage and if there are unforseen plumbing problems.

With shower and bathtub drains, the plumbing is almost always hidden behind walls or in the ceiling so as long as the plumbing had worked previously, a more complicated plumbing problems would be pretty rare.

Cost To Unclog a Shower Drain

Generally speaking, this service call would run in the neighborhood of around $150 plus taxes provided we don’t run into any of the unforseen plumbing issues mentioned…

The best recommendation would be to give us a call. That way, we can ask you the right questions about your specific clogged shower drain problem and give you a much better ideal of the cost to unclog a shower drain.

For drain maintenance services Calgary, Airdrie and area please give us a call!

Tip To Unclog A Shower Drain

There’s nothing like standing in dirty water up to your ankles while showering because your drain isn’t up to par.  Yeah….not pleasant, Before calling a Drain Specialist, you can try fixing it yourself. If your tub drain looks like this, chances are the blockage is right under the stopper.

Push down stopper, hold bottom of stopper with 2 fingers, and loosen stopper knob, may need channel locks, or pliers for this

Once knob is off, use a flat-head screw driver and loosen stopper from drain

Once stopper is out of drain, you should see build up and hair inside of drain.

After all of that is done, reverse the steps to put everything back together, stopper knob only needs to be hand tight. Test drain, if still not up to par, do not hesitate to call Sewerheroes! 403-354-4376 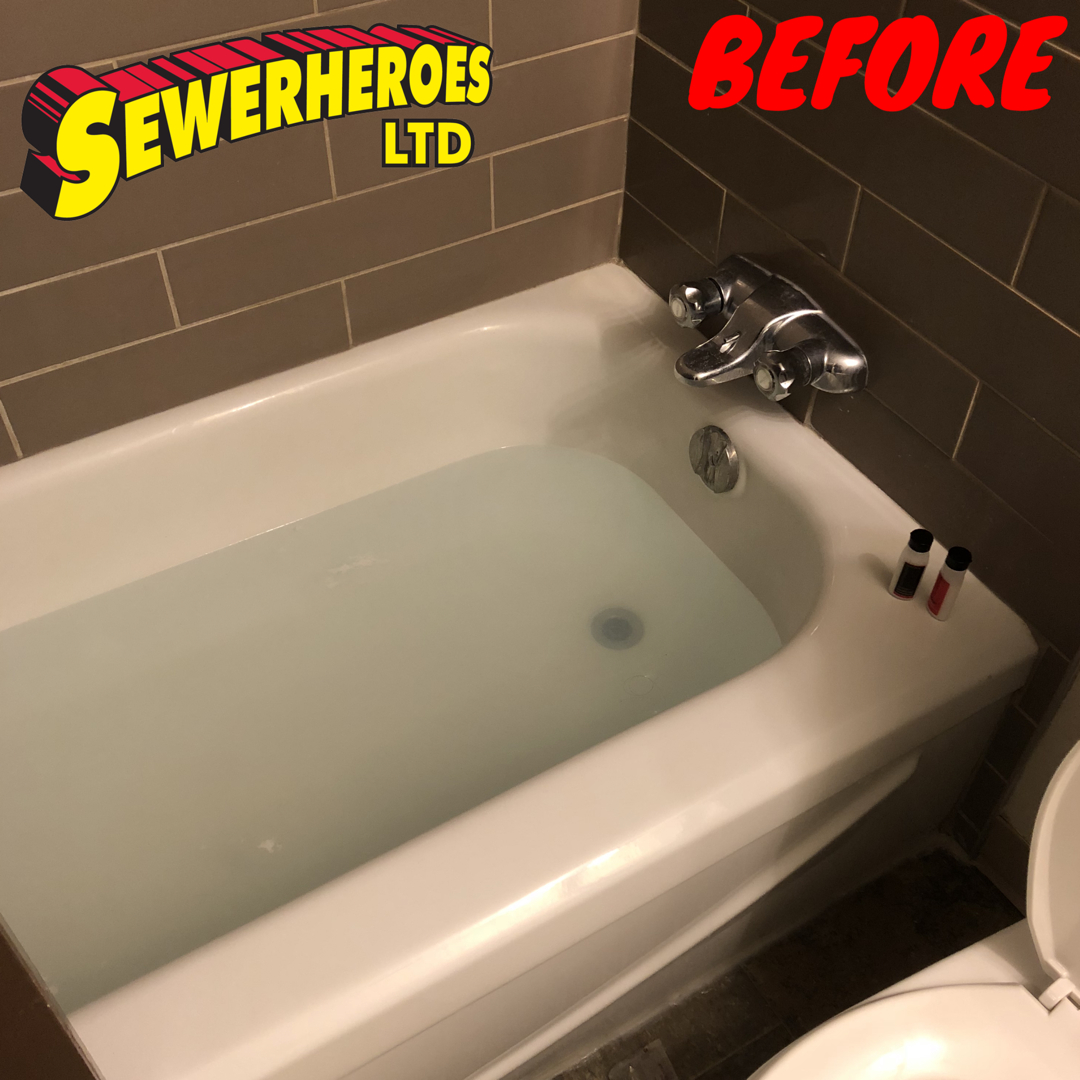 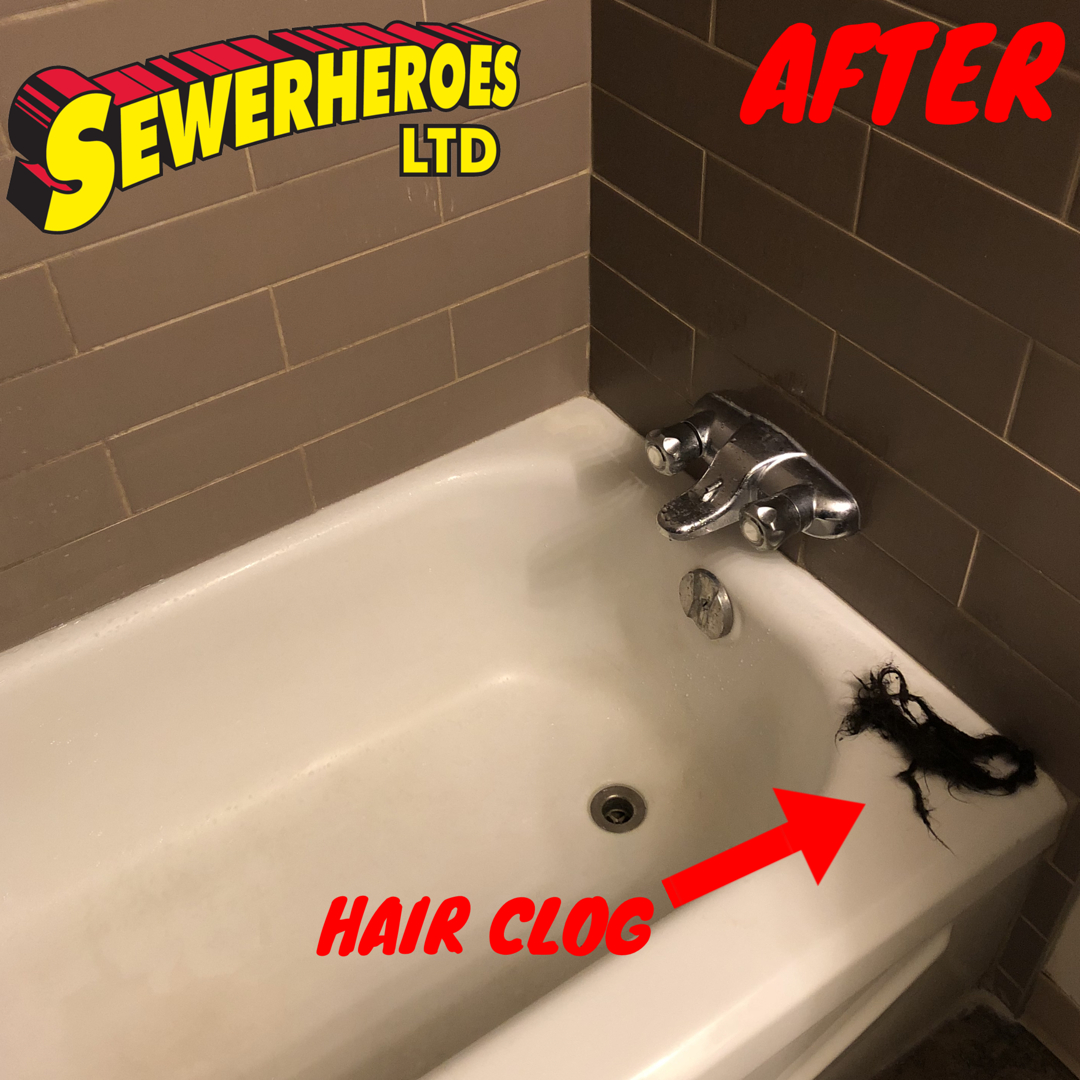 WHAT OUR CUSTOMERS ARE SAYING

Based on 22 Google Reviews

See All ReviewsWrite a Review

Amazing service. Joey took care of my washer not draining properly in minutes, and was great to talk to. He tested both my sinks as well while waiting for the washer to fill, and cleaned everything properly, even putting a plate beneath my sink to make sure the wood would not get damaged by drips from his work.

A 5 star business, Joey is a reliable guy. I caught him between jobs and he was able to service our rental property for our tenant within the hour. Great service, and reasonable price. I would recommend him to anyone.
Thanks Joey!

JOEY!!! That guys the man! Not all heros wear capes.. solid top shelve service. Had me and family up and running in zero time for a super affordable price!!